One hundred twenty-seven shades of grey

Nothing to deal with the bestseller, assured.
As you may already know, the DS 2D core supports paletted and direct colors, both of which are expressed using 5 bits per primary color (red, green, blue). This is 15bpp, also known as HiColor mode.
Having 'only' five bits per primary color means that there are just 32 different shades of gray that can be defined including the darkest - black, and the brightest - white. 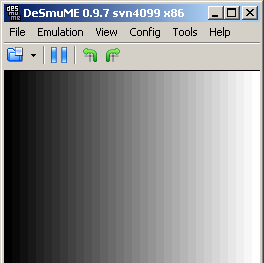 Back in 2008, while reading GBATek specifications, I had found out that the DS screens were 18bpp LCD panels, so I started a topic on gbadev forum suggesting that there might be a way to exploit this. It turned out that using the hardware alpha blending capabilities of the 2D core you can indeed force the hardware to show real 18bpp images. Fellow forum member Cydrak has even posted a very good demo then, and here's his original forum post with the link to his 18bpp demo.
So, having now 6 bits per primary color, it's possible to display 64 shades of grey. The improvement is significant, even if banding is still noticeable. 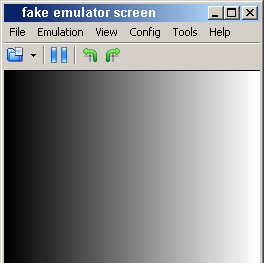 Pushing this thing further has been tickling me since then, so very recently I decided to give it a try. Of course, the hardware limit of 18bpp can't be overcome, and the display can't show more colors than what it's capable of. However, having a 2D core that can generate 60 frames per second, we can exploit the human eye persistence of vision. The idea here is that if we display two slightly different images alternatively at a sufficient high rate (60 times per second is surely high enough), our retinas will just perceive a sort of an average of the two images. And that's what we get: 127 shades of grey. Even if you know that the additional 63 shades aren't really there, they're simply the result of our perception. 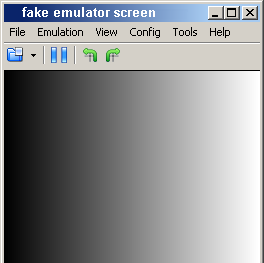 Note: the second and third image in this post are fake: there are no emulators that can show 18bpp and, of course, there's no way of making any emulator show the image that your eyes perceive. So, I suggest that you test the demo yourself on your DS. You can download it here.